This maybe seems a little corny to me, but I'm posting it anyway... 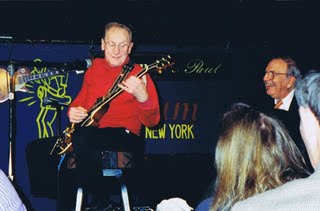 We each know that there are people out there, some close to us and some remote, who affect our individual lives in deep, foundational ways that form the core of our being. Parents, teachers, friends, enemies and people we admire for one reason or another help shape who we are, what we do and how we live. We should each have a list of such people somewhere to refer to and remember, to help keep us rooted in who we are.

I have a list like this, which has quite a lot of people on it. My wife is on top of it, of course, and then my family and good friends. Right below them comes the list of people with more "indirect" influence; people like Gene Roddenberry, Steve Jobs, George Lucas, Syd Mead and Bill Gates, in no particular order. One of those guys - and he's right near the top - is Les Paul.

I could go on all day about all the things he did, but that's what Wikipedia is for. Also, here's an awesome comic tribute by Jeph Jacques at Questionable Content.

I will say that I've always been amazed (but not surprised) that when his arm was shattered in a car accident, he had it permanently reset at an angle that would let him keep playing guitar. Now that right there is sheer dedication.

Les Paul's works have had an incalculable effect on so many people, and the entire world of music... and on me, too. My first two guitars were Les Paul copies - one from Sears with some fancy effects built in, and the second one of the famous Hondo "Lawsuit Les Paul Copies" from Japan, in the "Black Beauty" style with gold hardware and 5-ply binding. I still have it, here it is: 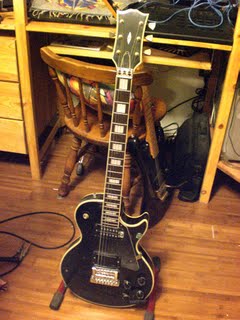 (Guitar nerds: yeah, I put a Kahler on it. I was big into Eddie Van Halen at the time - still am - but couldn't afford a hot rod type guitar with a Floyd Rose at the time. I traded in a bass and a little bit of cash to get the Kahler put on. Worked great, actually. There's an EMG 81 in there too. It plays really well, you can see why Gibson sued over it)

The last guitar I bought is a Les Paul, a real one this time. More about that later.

I started multi-track recording on the first Fostex portable cassette 4-track deck when I was 17. I did all the demos for all my songs back in the '80s on TASCAM 4-tracks - I still have a TASCAM 424 just like the one I did the Steele CD demos on, I use it as a mixer for my gear (it's in the above pic of the black LP copy, under the denim cover). I still have all the master cassettes. These things are all based on Les Paul's inventions, as are all the multi-track tape decks out there and the recording software that has replaced them.

Basically, I, and anyone else who has ever played an electric guitar or recorded music on tape, have been inextricably living in Les Paul's world.

Oddly, I didn't even know there was an actual person named Les Paul until several years after I heard the name of the guitar. I think I learned that from seeing a cover of Guitar Player magazine. I just knew "Les Paul" was a guitar type, had no idea it was named after a person, let alone the guy who invented it... I can be kinda slow sometimes.

Anyway, I think for most of us, we rarely if ever get to meet these "remote influence" people; we don't generally move in the same circles, if we even live during the same lifetime as they do. Happily, Les Paul was an exception for many, many musicians; he was really accessible. He used to play every Monday night at a place called Club Iridium off Columbus Circle in New York City, so anyone could go see him if they were in the area... so of course, we did!


My buddy and bass player Steve and I went in, watched him play, and got to meet him. At 82 years old, he put on a great show, he played stuff that I probably can't ever play even with two good arms and 40 years younger, and we had a great time. He just really seemed to be having a blast:

Afterwards, he hung out to meet people, take photos and sign autographs, so of course we talked to him. He was really happy and cool, and spent time with everyone that went up to him. Here he is with Steve: 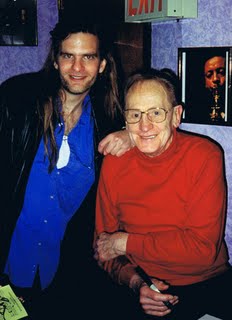 I got to thank him for making the previous oh, 15 years of my life possible. I'm not sure he heard me entirely, it was pretty loud in there, but he smiled and said thanks and shook my hand, and Steve took this picture: 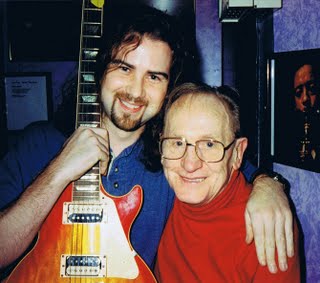 And then Les signed my Les Paul. Yes, I brought it with me to the show to get it signed. I wasn't the only one, believe me, there were at least 3 other guys who brought theirs too. Here's my Les Paul today with his autograph: 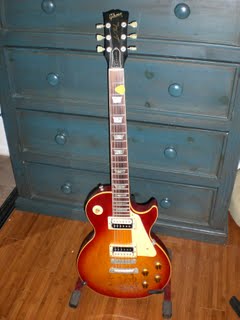 (Guitar nerds: it's the 1993 Classic Reissue 1960 model, cherry sunburst, like Jimmy Page's guitar. Gibson found some of the ancient Cuban mahogany they used for their guitars back in the '50s and '60s forgotten under a tarp in their warehouse, and decided to build some brand new 1959 and 1960 Les Pauls out of it, exactly the same way they were originally built. This one has the slight modification of adding Duncan pickups, a Jeff Beck lead and '59 rhythm. Man, do they scream. The guitar sounds amazing, but the old-school tuning heads aren't the best, so it doesn't always stay in tune, heh) 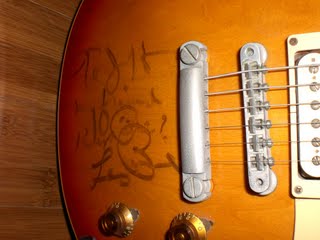 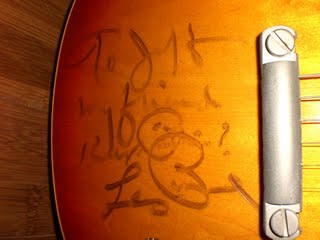 I'm glad I got to meet Les and tell him how much I appreciated his genius. We should all try to live a life like that, where you do some things that have essentially nothing but positive effects on the lives of others. I'm a bit sad that he's gone, but really, he lived a long and amazing life, so I can't mourn the guy... I can only celebrate him.

Thanks again, Lester Polsfuss! (what a great name, hehehe)
Posted by Jeff Z at 9:57 AM 2 comments: