Here's the bit I did on the Innocence dance remix (1.8MB mp3/160) over the weekend. I've been listening to it quite a bit... currently it's kinda more chintzy-electronic-y than I'd like. That will change as I keep working on it and mixing. It's on the right track. I'm borrowing bits from several different techno/trance/electronic artists that I like, but I think it needs more "Dirty Vegas" feel to it. There's nothing fancy going on with the beat either, just a straight beat with no percussion or fills, so some variation will help there too.

Quite a difference, huh! It's fun for me to play around with stuff like this and go "against type" musically. I don't think musicians should be limited to only doing one thing for their entire careers.
Posted by Jeff Z at 10:57 AM No comments: 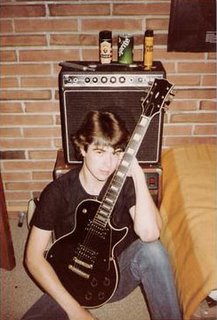 Hard to believe that's me, ain't it? One of my old friends found this in a scrapbook somewhere, scanned it and sent it to me. I actually still have a print of this too, in one of my photo books. It was taken in my dorm room, with its lovely artistic bare brick walls... stylish! The guitar is actually a classic - it's the real "fake" copyright-and-trademark-infringing Japanese Les Paul copy made by Hondo in the 1970s. I bought it at a music store in Brunswick, Maine, along with an original Small Stone phase shifter, for $150 in 1982... and I still have them both, they both still work fine. This picture shows it before I had the Kahler whammy bar installed. Hey, I switched from being a Tom Scholz nut to an Eddie Van Halen freak, and couldn't afford a Strat with a Floyd Rose... so I compromised.

The amps behind me are a Montgomery Ward special on top, with an old Pignose 150 Combo underneath and hard to see behind me. The Pig had a really bassy tone, not a lot of high end at all, so I used to plug the Monty, which was nothing but glassy high end, into the Aux out and use it to just add some sparkle at the top. Worked pretty well, too, a very unique sound. Both these amps are still working as well, my brother Matt has the Pignose and has just replaced the speaker with a Celestion vintage 30, while my brother Dan has the old Monty and a red Squier Strat that I bought around 1987. Hehehe... family hand-me-downs.

Meanwhile, I got to do some music work this weekend, on the new version of Innocence, which I'm doing as a techno dance mix. I just did a basic groove for a full verse, then the pre-chorus and a single chorus, only 1:38 worth. It's taking quite a bit of time because I'm still learning how to use Reason and also I'm doing a lot of sound-choosing, going thru the various synth presets to find stuff that sounds like what I hear in my head, playing with the settings and learning how the synths work. I did some playing with friends's keyboards back in the day, but it wasn't a core music interest, and I never owned a synthesizer. So this is sorta familiar but still pretty new to me - with Reason I now own a "roomful" of synths, samplers, drum machines, and various other effects. Reason is just flat out effing awesome, worth every penny.

I wasn't able to save out an MP3 direct from Reason, so I'll have to bring it into DP to export it. I'll edit this post tomorrow to add it for your listening pleasure and comments.
Posted by Jeff Z at 10:15 AM 4 comments: