"Quantize" Is My Friend.

So it turns out I do not actually have a MIDI file for the drum track of Only In Your Mind, which I thought I did. Well, all right then. That just means I would need to record them over again, which would be the first time I'd recorded with my e-drums.

Now, I thought this would be problematic, in that the studio is in my bedroom, but the drums have been set up in the living room. So either I had to install Digital Performer on the art Mac (which is named Albert Einstein, for future reference, a kudo to Fred Pohl's Gateway series), as well as disassemble the spaghetti wiring of my audio/MIDI interface to relocate it to Albert so I could play the drums where they were, or I had to cross my fingers and hope the drum set would fit into the small area of floor space in the bedroom. When I bought the drums, I got a small student set for just that reason; time to put it to the test. Here is the result: 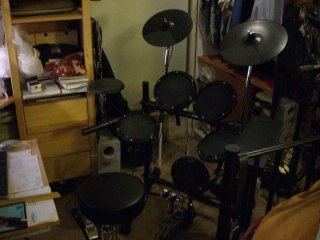 Happily, it fits quite nicely! Of course, I can't get to the wardrobe while it's there, but then again it is very light and easy to move all in one piece - I only have to remove the pedals, and the whole thing is easy to tuck under one arm, I don't think it even weighs 25 pounds.

I figured it would be pretty easy to lay down the track; I would just import the original song right off the CD and then play along over it. Yes, that's called "cheating," but see, I'm not a great drummer. Serviceable for casual jamming, maybe, but not really that good. I used to be better when I was in high school, where I played drums in the school band and practiced 3-4 days a week. Anyway, so with the magic of digital technology, I brought in the album track and that worked great. And then it got complicated.

DP has this cool function where it will analyze any piece of audio to find its "beats" and tempo. This is mainly used for slicing up drum grooves for loops, but you can do it with a whole song if you want. Since it's very important to record using a click track, for time accuracy, I figured I'd use that function to get the exact tempo of the song and then set everything up to record at that tempo. Easy, right? Heh... sure.

It turns out that even though we recorded the song with a click track, the timing wavers quite a lot - even the most excellent drummers are not computers! (Sorry, Hiro...) And while it's okay to have the tempo go up and down a little bit - great orchestra conductors do it all the time for emotional effect - the tempo analyzer just couldn't quite get the thing right, and the click track was wavering all over the place. After a couple hours trying to make that all work, I just said the hell with it and started over.

I wound up just picking a tempo that I knew was almost exact (117 bpm, if you're wondering). going in by hand and slicing up the audio file whenever it got to a place where the song beat deviated from the click, then moving the cut pieces very slightly until the snare hits lined up properly. It's easier to do than it sounds, because the software shows the audio waveform graphically - and the big ol' metal snare hits are the biggest peaks in the wave. You can just nudge them with the arrow key until the peak lines up with the beat markers. There were some little perceptible gaps, but I was able to fix all the timing weirdness, and thus just play directly along with the original song to record.

But of course, I'm a crappy drummer, and thus we come to the title of this post. All MIDI recording devices for many years have had the lovely helpful function called "Quantize," which perhaps sounds like something Stephen Hawking might be on about, but what it does is the computer looks at where your drum hits are, and if they're late or early, it puts them where they're supposed to be. Quantize is the crappy drummer's (and keyboardist's too) best friend! So now the drum track sounds like a drummer with good timing played it. Interestingly, this software will take an audio drum track, recorded with mics from real drums, and quantize that too. So, perhaps your favorite "famous" drummer isn't as good as you might think. (Here's a hint: if he's young and cute and in a band that gets mainstream radio play, he's probably cheating.)

Anyway, so I got the drum track done, in a lot less time than it would have taken me to program the drum machine - which is exactly why I got the e-drums, other than for fun. Next time it will be quicker, I'm sure. And now, it's time for dinner and a jynnan tonnyx!

Guitars and hopefully bass later tonight. Should be able to get a rough pass of the whole thing done, then vocals tomorrow. 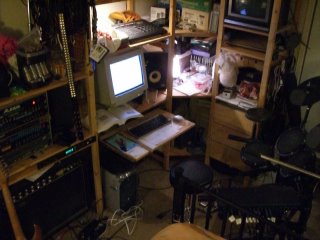 Here's a pic where you can see the whole studio setup. My old guitar rack is on the left, with my Mesa amp below. My old 4-track and the R-8 Mk II drum machine are above the screen. This is just about all you need these days to record some pretty high-quality music.
Posted by Jeff Z at 6:50 PM